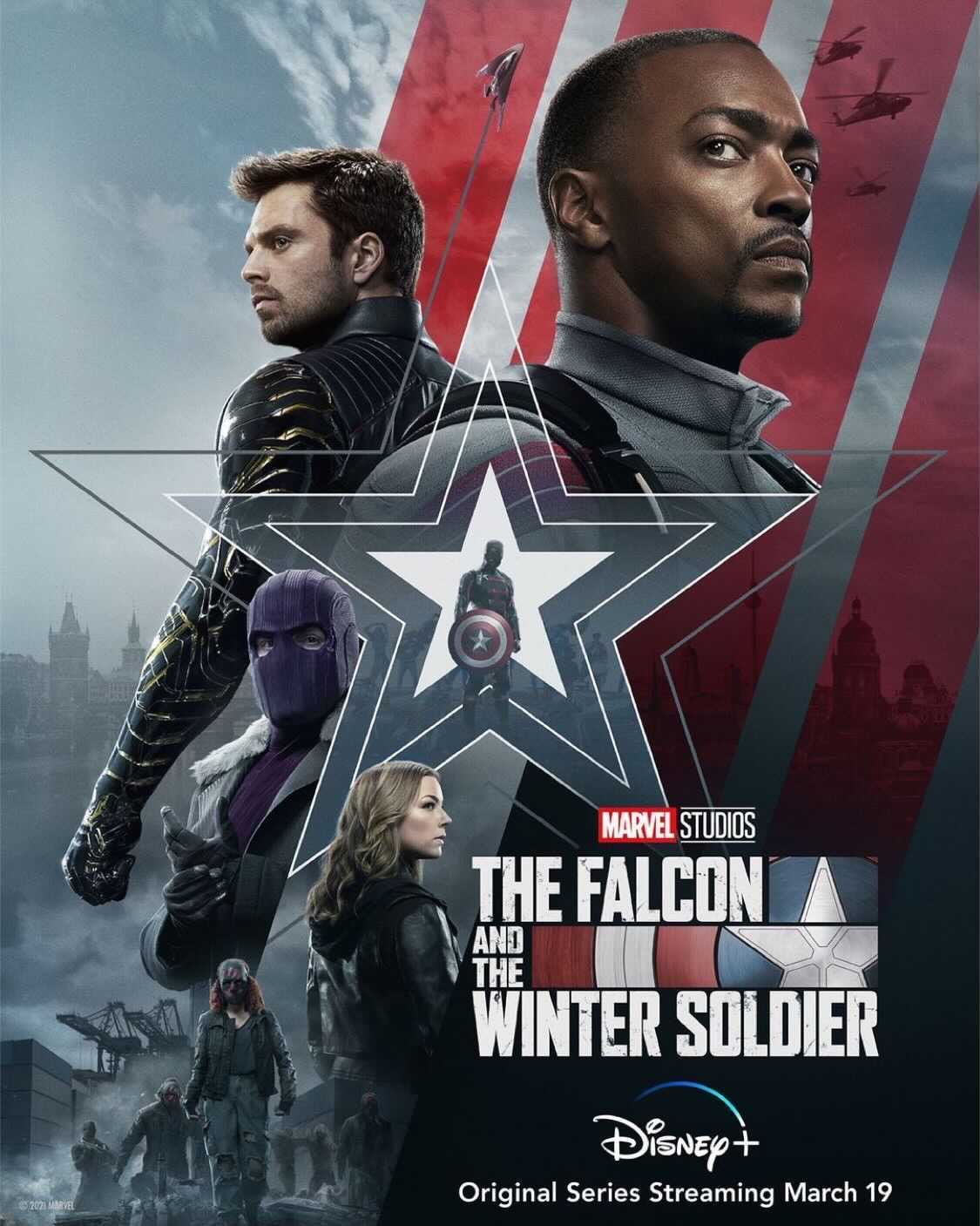 The Falcon and The Winter Soldier Poster from Disney+

The Falcon and The Winter Soldier Poster from Disney+

Falcon & The Winter Soldier set to premiere on DisneyPlus

As the Marvel Cinematic Universe Phase Four continues, so does the legacy of Captain America, now being carried into Marvel’s new mini series Falcon And The Winter Soldier. This new miniseries premiered March 19, shortly after Marvel’s newest TV series WandaVision.

This series features Sam Wilson, also known as Falcon, played by Anthony Mackie. It also stars James Buchanan Barnes, who is known as the treacherous Winter Soldier, played by Sebastian Stan. The show sets the scene by primarily revolving around the events after Avengers: Endgame and Sam Wilson’s responsibility to take up the mantle of Captain America. As for Bucky Barnes, who was dead for half a decade, he never got a chance to put his past as a forced assassin and super soldier behind him and was seen as a terrorist and murderer.

These heroes aren’t the only close friends of Captain America we’ll see in the show. Sharon Carter, aka S.H.I.E.L.D Agent 13 played by Emily VanCamp, will be making a return. And what’s some of the world’s greatest heroes and allies of Captain America without a villain?

It’s also confirmed that the disastrous villain and master strategists Helmut Zemo, not to be confused with his father Baron Zemo, will pose a threat in what he calls finishing his work. He has unfinished business after framing Bucky Barnes thus playing a role in breaking the Avengers. He’s proven that he’s not just a threat to Captain America but to those around him.

Freshman Aiden Fluck, had this to say about the show “I love watching WandaVision on Disney Plus,  I don’t know much about the Winter Soldier but I’m definitely going to watch the show because in the movie they were great in Avengers: Endgame.”

The trailer definitely has fans scratching their heads on certain aspects, even the people who keep up with the movies or went to see Avengers: Endgame.  “I saw the trailer and it looked cool, but I don’t know who that guy is with the shield dressed like Captain America,” added Fluck.

People definitely have their own opinions on the show, and freshman Kayla DiFede had this to say about it. “I own the Disney Plus streaming service and they really haven’t had many good shows to watch other than WandaVision, but I saw Falcon and the Winter Soldier and it looks similar to a movie,” stated DiFede.

Some fans may need some catching up before they continue on with these character’s journey.  DiFede commented that she doesn’t necessarily know all the characters on the show but that won’t stop her from watching it. “I know Falcon from seeing him in a few Marvel movies and TV shows I had watched but that’s really it.”

There are other students who need no catching up.  These students are no only fans of the movie, but of Marvel’s decision to continue the franchise on the small-screen. Freshman Justin Lesser was very happy to state, “Falcon and the Winter Soldier are really cool superheroes and so far the Marvel shows have been great.”

When asked how he felt about their plans for the show he responded, “I didn’t really like how Captain America retired, and I didn’t see Falcon using his shield too much.”

Kevin Feige, president of Marvel Studios, stated that he plans on focusing Marvel’s set of new shows on different characters and detailed character development that may be difficult to do in one movie.  There is definitely love for these characters and there is a chance people might like what they do next.  But with the show’s premiere there is also bound to be some criticism.  Only time will tell how audiences will react.