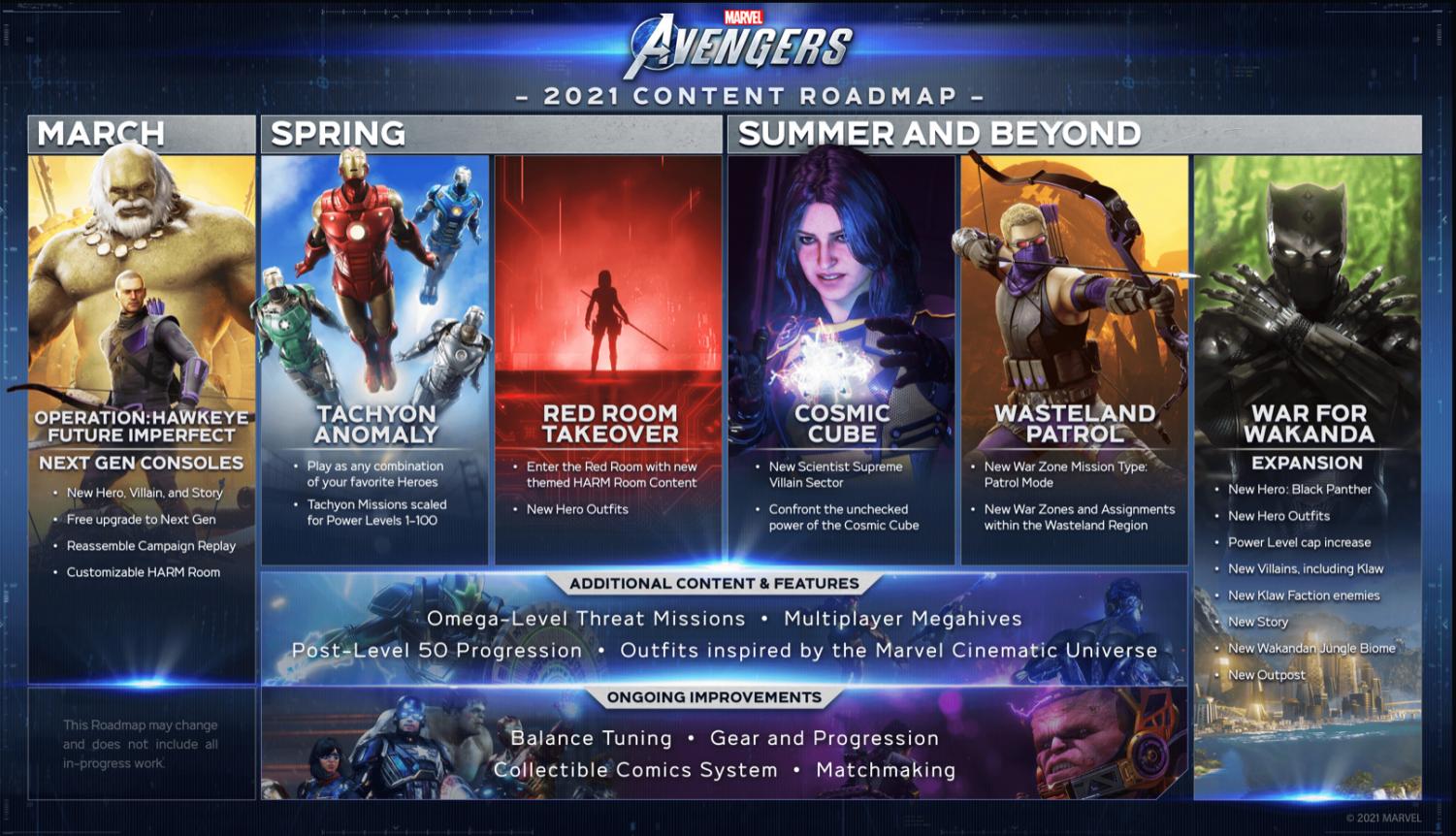 New additions will make for an exciting spring and summer

With the release of Marvel’s Avengers being almost seven months ago, fans were heavily speculating on seeing more variety when it comes to playable heroes and were met with just that, as well as a handful of upcoming new content. During Square Enix’s live showing of all their new games and content, they revealed new surprises coming to Avengers with their new road map which extends until summer of this year.

March featured a new adventure for the added Avenger Hawkeye. Marvel’s Avengers also brought us into spring with the new Tachyon Anomaly missions. The missions have been said to allow players to play as their favorite Avenger, encouraging the opportunity to play as the same hero another player has chosen.

Also coming this spring is the Red Room Takeover said to feature adversary of Black Widow, Yelena Belova, seeking to “settle a score” by trapping Black Widow and the other Avengers in her own recreation of Black Widow’s iconic Red Room. This particular event will bring a new set of outfits and Red Room inspired cosmetics.

Now entering summer, it’s been revealed that players will once again be facing off against Monica Rappaccini’s new attempt to create a cosmic cube to defeat the Avengers after the events of Hawkeye’s adventure to the future. The Cosmic Cube brings a new challenge to the Avengers and a new experience to the player in these missions that involve facing off against a clone army.

During Square Enix’ Presents live streaming, which took place March 18, they made what was probably their biggest and most anticipated reveal. They gave us a one minute trailer for Black Panther’s new expansion; War for Wakanda. This expansion plans to bring us the new hero Black Panther, a new villain, Klaw, as mentioned in the trailer, and a Wakanda biome. There is not yet an official release date and not much has been said, although fans can definitely expect an exciting new story for the king of Wakanda.

Additionally, changes to the game are being worked on as well as some extra content, like Marvel Cinematic Universe suits, and improved gear progression. But, players will have to wait for these additions to the game as there is no official release date.

As this is only a short road map of what’s expected to come in the future for Marvel’s Avengers, in a recent IGN interview with the studio’s head Scot Amos, he stated the team is focused on “delivering high quality when ready” and aiming to “be transparent.” This means that they most likely have more information on the upcoming in game features, but are probably holding off on revealing it until they’re ready with complete content.

With all the new content being added to the game, fans have a lot more to look forward to in the future. Although it seems each person may have their own specific piece of additional content to look forward to. “I’m most excited for Black Panther after watching the trailer, and I think it’s gonna be a lot of fun playing as a new Avenger,” said freshman Alicia Hooper. As Black Panther was rumored to be included in the game, it definitely came to a few people’s surprise that they’d also be getting a full DLC for him.

It’s possible that fans could be unsatisfied with the new changes being made as well. “I really haven’t played Avengers because I wasn’t having much fun after I finished it,” said freshman Aiden Fluck. “ I love Black Panther but I don’t think I’m going to pay for him if they tell me I have to.” Black Panther seems to be serving as an expansion, rather than an added event like the others. No real price has been released for King T’challa.

As fans of the game can continue to form opinions, they can be sure to expect more content in the coming years as promised by the developers. This seems to be the largest piece of information on the game players have received so far. With the exciting feedback from some of the most asked improvements and additions to the game, gamers and Marvel fans can surely have at least a few things to be excited for.